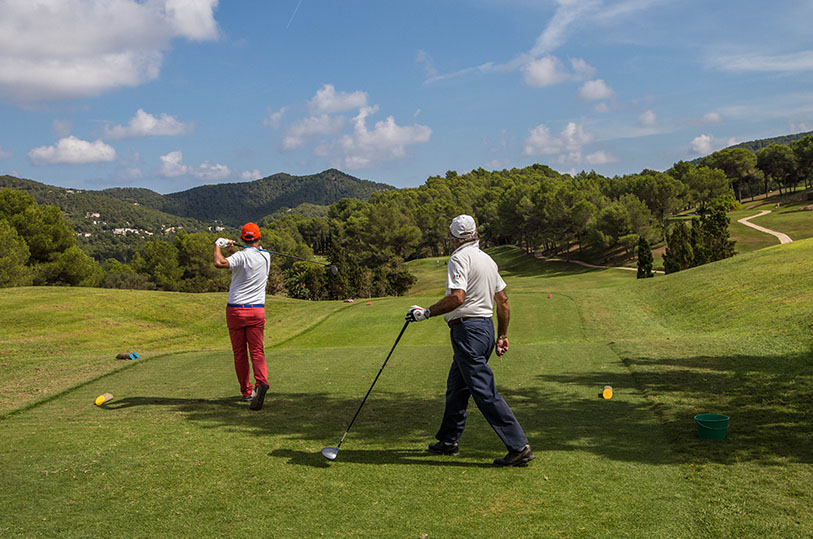 Within the modalities of golf in pairs, we have the Greensome one, which is played in the following way: From the tee, the two players will make their shots.

This week we will talk about the Greensome modality as next December 16, we will be hosting the Cáritas Golf Ibiza tournament by azuLinehotels and we will be playing in this modality.

Within the modalities of golf in pairs, we have the Greensome one, which is played in the following way:

From the tee, the two players will make their shots. Arriving to the position where the first shots have fallen, strategy will be decided and one of the balls will be chosen to be played until finishing the hole; the players taking turns at the ball.

What should we take into account to make our game strategy?

1.Obviously, the better positioned ball must be chosen if there is a noticeable difference in the distance traveled and the distance remaining to reach the hole or by the position in which the balls are located (fairway, rough, bunker, etc.)

Not only must be taken into account the distance we have made and the distance we have left to reach the flag, but also on the design of the hole and position of the flag on the green; the ball that should be chosen will not always be the one closest to the green or in the centre of the fairway. Sometimes, being in the rough gives us a better entrance to a green protected by lakes, bunkers or a nearby out of bounds.

2.We must also take into account the strongest element of each players game, that is, if one is better in the short game or with the putt or with the irons leading to the green. Based on all this we will be able to decide the strategy for the rest of the hole.

An important decision between the two players will be the type of ball to be used to play. The level of the players could be very different and the balls they use could also be different in terms of hardness. So it is important that an agreement is reached on which brand and model of ball to play.

I hope my advice has been useful and good luck in your next tournament!