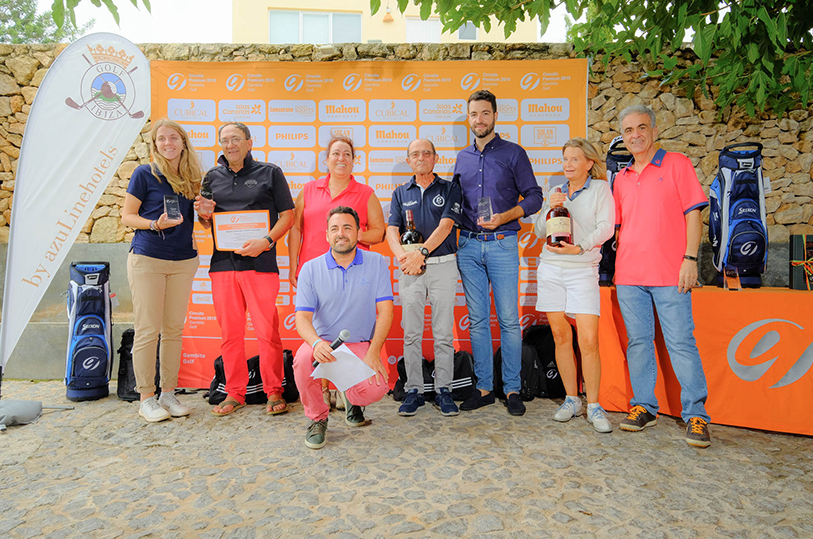 On Saturday, September 14, the 2019 Gambito Premium Circuit was hosted at Golf Ibiza with a tournament of this great amateur circuit.

On Saturday, September 14, the 2019 Gambito Premium Circuit was hosted at Golf Ibiza with a tournament of this great amateur circuit, held for the first time on the island of Ibiza.

At 09.00 in the morning and following the sound of the shotgun, more than 40 players took to the 18-hole course of Golf Ibiza to compete in this prestigious circuit. During the tournament, all the players were able to enjoy the golf course and at the 16th hole partake of several select food and beverage products.

At the end of the “Golf de Ibiza” 18-hole course, a welcome drink bar was held next to the tournament tent of the sponsoring brands and the awards ceremony for the classified players took place. In addition, the tournament featured six special prizes for the nearest ball and the longest drive along with a grand prize draw for all the tournament participants.

Ester Vila de Vicente (39) in the women’s category, Toni Gila Forner in the men’s second category (37) and Pedro Pons Cifre, in the men’s first category (40) were the winners of the tournament and the first classifieds of the three categories in play, which gave them an invitation with direct places in the Grand Final of the circuit to be held from November 28th to December  1st in Lanzarote (Canary Islands).

The great event culminated with a thank you trophy from Gambito Golf to Jose Antonio Cachón Torres, President of Golf Ibiza, for making possible the arrival of this magnificent tournament in Ibiza.

From Golf Ibiza we want to thank all the participants of this magnificent tournament; and especially to the Gambito Golf organization, for bringing this great Amateur circuit to Golf Ibiza.