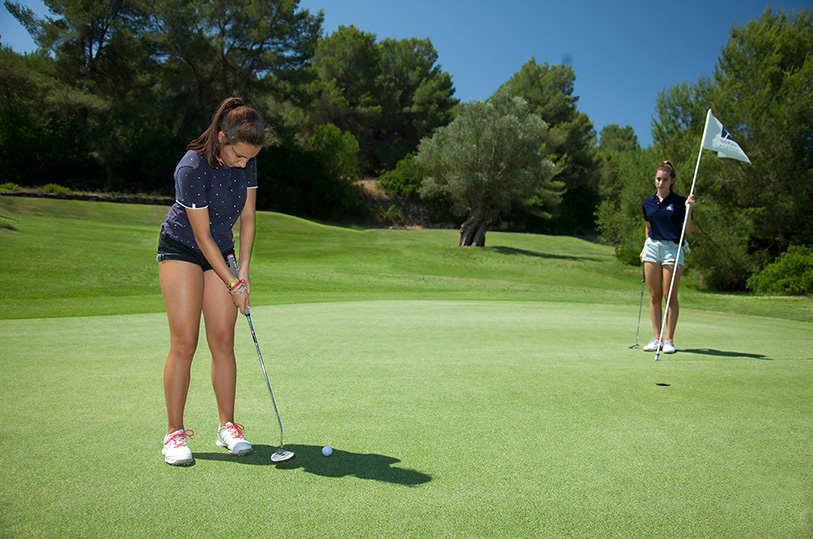 As mentioned in the previous pro tip, the speed of the putt, the putt is the only stroke in which the ball does not fly, it rolls across the surface […]

As mentioned in the previous pro tip, the speed of the putt, the putt is the only stroke in which the ball does not fly, it rolls across the surface of the Green. Usually, we use the putt at least once on each Green to get the ball into the hole.

The club to be used for the putt

The golf club for the putt differs from the others in the angle of the club face, which oscillates between 2° and 5°.  It is the shortest club of the bag. The club has a flat surface on one side and is rounded on the other. There are many different models so that each golfer can decide which is best for them based on the design. During the last years and like all other golf clubs, the putter has undergone a series of technological changes. At first, they were all solid steel although now they have inserts of the same material as the golf ball to have a slightly softer impact, and have created a series of raised grooves on the face of the club to improve the rolling of the ball when hitting it with the club.

Technically the putt is not the most difficult stroke to learn, but it is the most accurate. To be successful with this stroke, we need to learn to see the downward and upward slopes of the greens and learn to calculate the force required with which to hit the ball. We need to judge the place where we want or think that the ball should come to rest, hold the club more in the palms of the hands and not just the fingers as with the rest of the clubs. Performing a balanced movement with the same distance both behind the ball and the follow through with a constant speed will help to make us good players.

Changing the speed during the shot, will make the calculation of force is less precise. The movement should come from the shoulders and chest. We should try not to use the wrists as this will make our stroke inaccurate. In the placement, we need to distribute our weight evenly, with the angle of the body well marked and our arms relaxed. We also need to keep our eyes on the ball and its position, with a finger to the left of our sternum so that the club strikes upwards. This will allow us to make a more linear movement so that the ball rolls better and arrives at our goal, the Hole!

Good luck with your putt and see you at Golf Ibiza!

« Convocation for the 11th Summer Tournament, in memory of Ginés Paredes
Lob Shot in Golf »