On August 20th of this year, the first Charity Golf Tournament in collaboration with the Elena Torres Association for research against cancer will be celebrated at Golf Ibiza. The tournament […]

On August 20th of this year, the first Charity Golf Tournament in collaboration with the Elena Torres Association for research against cancer will be celebrated at Golf Ibiza. The tournament will be held in memory of a former club member and friend, Ginés Paredes. It will be the eleventh summer tournament, but the first to take place in collaboration with the Elena Torres Association to raise funds.

Players in the tournament will compete under the Individual Stableford rules, and all players with a license and handicap in force, issued by the Spanish Golf Federation (RFEG), will be able to participate. There will be three prizes in categories 1 and 2, mixed game. There will also be other special prizes, such as the nearest ball (hole 16) and the longest drive (hole 8), differentiating men and women.

The Stableford mode of play consists of the score of each hole in relation to the par: 1 point per bogey, two per par, three per birdie, four per eagle. When it is not possible to finish a hole within the required strokes to score, the player collects their ball. The winner will be the player with the most points at the end of the game. The Stableford mode allows fluid play, as players can remove their ball from play.

The tournament will start at 09:00 and groups of 4 will be designated by Marcos Juan, the Golf Ibiza Sports Director and Javier Bermejo, golf club member at Golf Ibiza. During the charity day, in addition to the sporting event, there will also be a meal, a solidarity raffle with prizes that will be handed out by one of the instructors of Golf Ibiza and some fun activities will also take place. Chef Sara of the 19th hole restaurant will be in charge of the ovens preparing the meal for the end of the tournament. 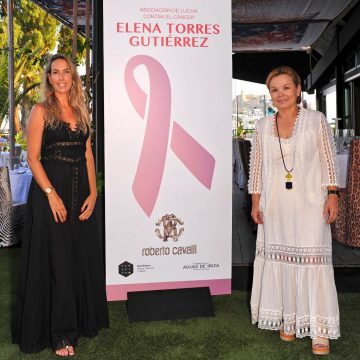 The Association for Cancer Research, Elena Torres Gutiérrez, was born in 2015 to help combat the disease that ended the life of this wonderful woman to which the association pays homage. Elena Torres Gutiérrez, daughter and sister of the presidents of the Association, died of cancer in 2012. A huge blow to her family, after which they became aware of the major shortcomings in Spain as far as medical research is concerned and decided to support this cause. The project is one of the few works focusing on medical research against cancer.

Entries are open until Thursday, August 17th.  For members of Golf Ibiza, the fee is 60 euros and for non-members the price is 100 euros. There is the possibility of joining us for the meal only and the price is 40 euros. The inscriptions can be processed directly with Golf Ibiza, by telephone – 971196052, or by sending an email to golfibiza@azulinehotels.com.

Buggies and electric cars can be booked in advance.

Many thanks to all the collaborating companies, the members of the club and all our wonderful professionals that make possible the celebration of this wonderful charity tournament at Golf Ibiza.